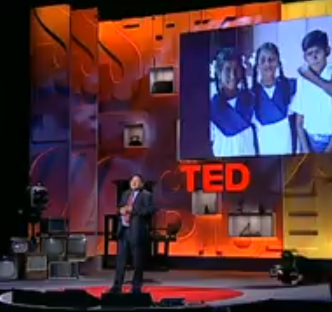 You’ve read it here before and you’ll probably read it here again: The Premier Tutors is all about self-empowerment. We want you to be the best you can be, using the simplest methods possible. There’s no point in trying to tear down a wall when there’s a door right there that leads to the other side, right? Dr. Mitra feels the same way. This 17-minute TED Talk demonstrates just how much we are all capable of when our curiosity and determination is allowed to flourish on its own.

Technology has opened an infinite number of doors for students just like you to learn. In fact, technology has opened the door for millions of impoverished students across the globe, many of whom have no access to teachers or schools. We might joke that a school-less society would be preferable to this one, but illiteracy is a real and ongoing tragedy. We doubt you could even imagine what it’s like to be uncomprehending of things as ubiquitous and signs and menus. You wouldn’t even be able to text!

Mr. Mitra began his experiment by embedding a computer with internet access (all in English) into a wall in a poor slum where there nobody goes to school. He left it there with no instructions and nobody to help. Through a series of successive experiments he found that children can learn a tremendous amount of information without any help from adults. When students asked him, “How do we do X?” Mr. Mitra replied, “I don’t know,” so they would be forced to figure things out on their own. And they did.

What do YOU have the capability to learn on your own? How can you use the internet to learn things of value? Can you collaborate with your peers and friends to turn your “How do I….?” questions into “I learned how to….” statements?